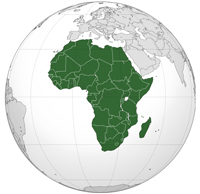 Lack of or poor service delivery …TIA. Strangling of women by their so-called lovers…TIA. Sewage water running in the streets…TIA. Pastors or traditional healers raping while using the Bible or spirits to justify their licentious actions…TIA. Being cursed and yelled at in hospitals…TIA. Standing in line for hours while those supposed to be assisting are on their phones SMSing friends…TIA. Lack of respect for life…..TIA.

Where did this phrase originate? How did it enter the African lexicon and made its way into popular film and music? Famed Somali native K’Naan has an entire song called TIA and Leonardo DiCaprio uses it in his movie Blood Diamond to illustrate that murder, theft, and dishonesty are acceptable because after all “This is Africa”. When did it become Afrikan not to care about Afrika?

Similar to the integration of the word “nigger” in everyday Namibian music and speech, seemingly without knowledge or perhaps disregard to the meaning, origin or pain encapsulated therein, this TIA concept has not received much examination in Namibia.

I argue that in its current form TIA is inconsistent and incongruent with being Namibian and with being Afrikan. We need no further proof than this line in our national anthem: “glory to their bravery, whose blood waters our freedom.”

People do not sacrifice their lives so that their blood would water the seeds of surrendering to circumstances. When will we realise that we are mostly in the situation that we are in as Namibians and as Afrikans because of our refusal to do better when we know better? When will we fully examine this TIA concept and instead turn it into a celebration of the ideals that reflect a proud people?

This was published THE NAMIBIAN Newspaper – Letters to the editor section on 08 July 2013 – http://www.namibian.com.na/indexx.php?archive_id=111474&page_type=archive_story_detail&page=1